A Look at the Things Americans Can't Live Without

"I have an addiction." For many in recovery, these words alone represent an important step forward. By acknowledging their disease, those with an addiction can begin to embrace solutions—and the support of those facing similar challenges. What seems like a simple act of identification can pave the way for a powerful realization: "I have a disease that requires treatment."

So why are those crucial words so hard to say? It's largely because the public perception of addiction remains characterized by stigma, research shows. According to research from the Journal of the American Medical Association, a leading reason those with an addiction don't seek treatment is "the opinion of neighbors or other community members." Another study found that people with an addiction feel "unworthy" or "treated unfairly" when they disclose a personal history of substance misuse, even to trained medical professionals. Across many contexts, those facing addiction fear they'll be judged negatively by peers and authorities, hindering their ability to ask for help.

With as many as 1 in 7 Americans experiencing symptoms of addiction at some point in their lives, the stigmatization of substance misuse is both unfounded in its basis and tragic in its effects. To combat the growing toll of addiction nationwide, Americans must move past the lingering assumption that addiction is a moral failure.

In this project, we'll explore how some of addiction's core characteristics are familiar to many of us on a personal level. We adapted the criteria used by the American Psychological Association to assess addiction, converting them into seven questions. We then posed those questions to over 1,000 Americans, asking them to respond truthfully to each one. But instead of posing them about substance misuse, we asked about common habits, including caffeine consumption, the Internet, television, social media, exercise, and engaging in sex or viewing pornography.

Our results show that the dynamics at work in substance misuse are present for many of us in our other habits—though with no stigma attached. For those who still dismiss addiction as a lack of self-control, our findings beg a simple question: Is the behavior of people with an addiction fundamentally different than the way most Americans engage in other habits?

The American Psychological Association suggests that individuals who identify with three or more of seven criteria within a one-year period may exhibit symptoms of substance misuse. So we applied the same standard to our participants, asking them about each item on our list of common habits. Here's how many of our respondents said yes to three or more questions for each habit.

Our results were overwhelming in at least one respect: Americans have a hard time separating themselves from their media. Virtually every respondent met three or more criteria about their use of the Internet, and social media wasn't far behind. These findings resonate with a growing concern about our culture's compulsive engagement with the digital world. Indeed, tech titans like Google have been forced to grapple with ethical concerns about their products' addictive potential in recent years.

But parallels to substance misuse weren't limited to the digital realm in our findings. A traditional medium, TV, was the third most likely to elicit three or more affirmative responses, followed by exercise, a habit most people assume is purely beneficial. Even for caffeine consumption and sex, the last ranked habits, more than 80 percent of respondents identified with the adapted criteria. Is the mechanism of addictive thinking more widespread than we thought?

Our Habits by Gender 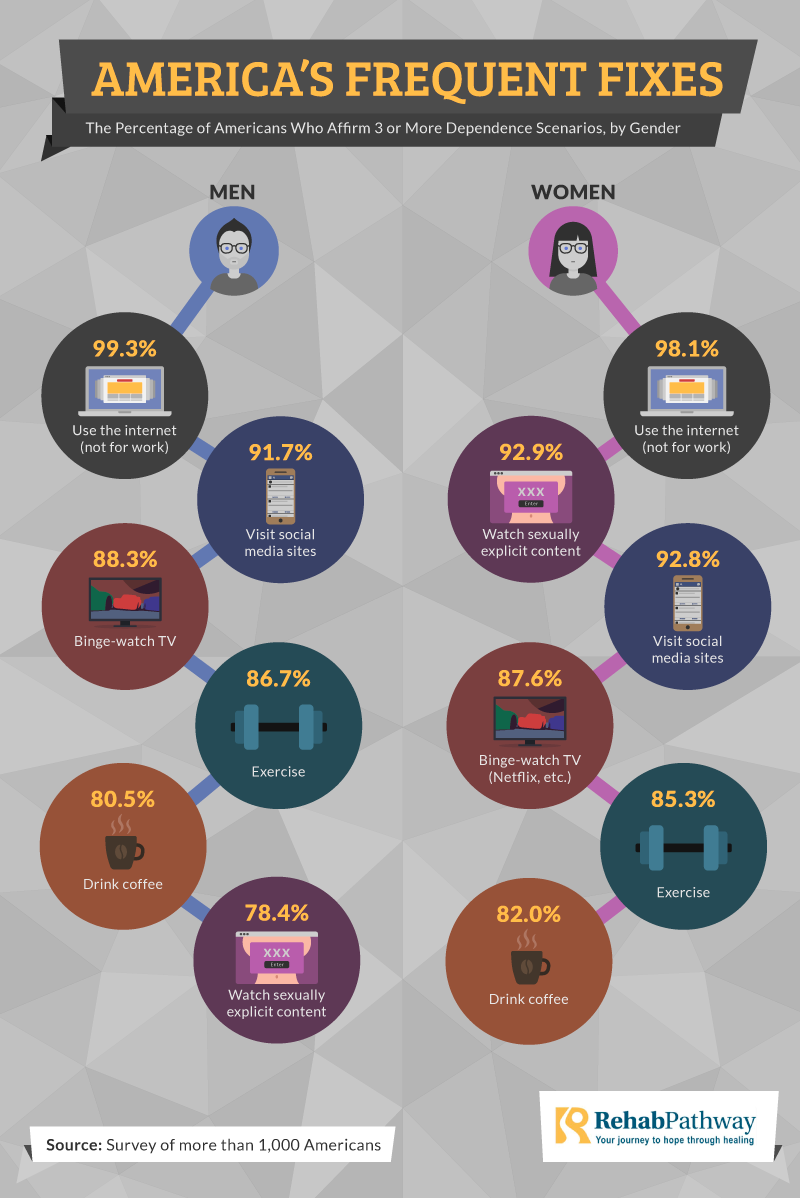 When we segmented our results by gender, we found that levels of identification with the criteria were largely consistent among men and women. This presents an interesting contrast with data on reported rates of substance abuse treatment which suggest that men may be about twice as likely to receive help for substance dependence or misuse. But those findings also suggest that women are far less likely than men to use drugs in the first place. With these universal habits, that difference isn't likely to be true, explaining the relative parity among genders.

Our Obsessions and Professions 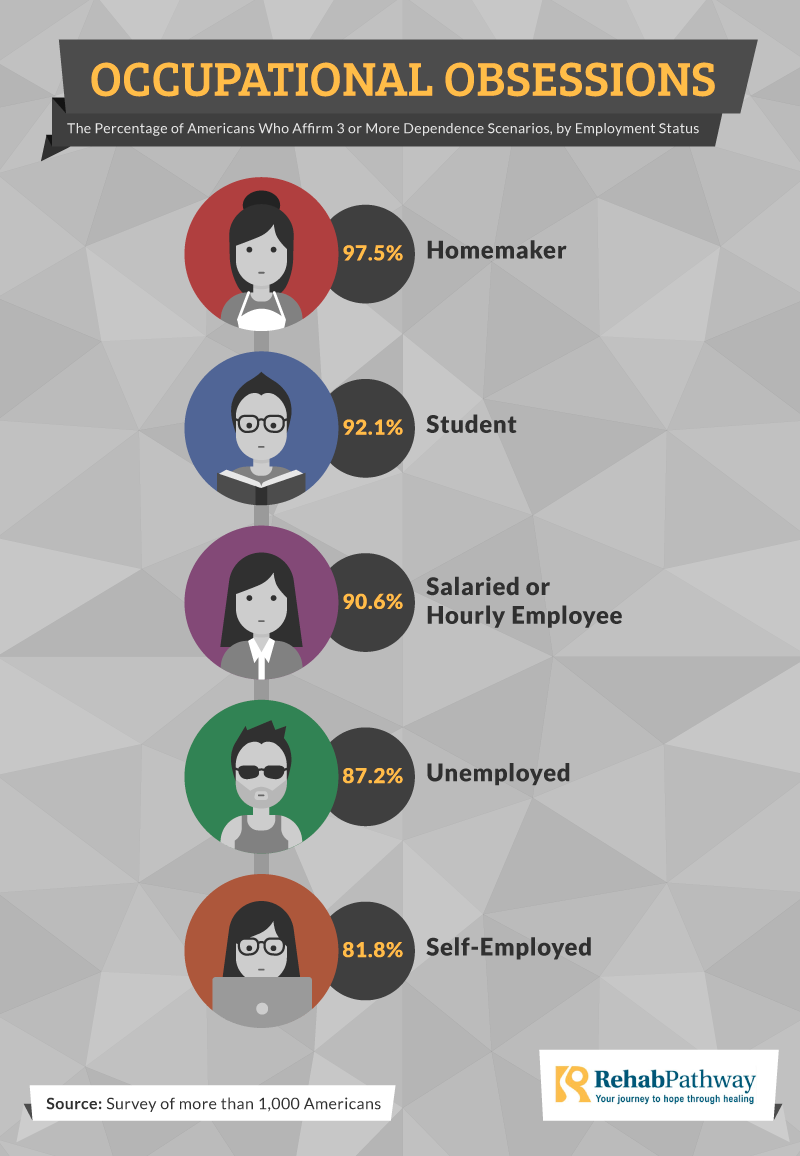 One might assume that consistent employment would disrupt the frequency and intensity of the habits discussed in our survey. But when we studied our results by employment, compelling evidence contradicted that trend. Unemployed individuals were among the least likely to affirm three or more dependence criteria, followed only by the self-employed.

While students were the second most likely group to confirm three or more criteria for at least one habit, homemakers led all groups. Nine in 10 respondents with hourly or salaried employment identified with at least three criteria as well. These findings mean we can't dismiss behaviors limited to young people or those without real responsibilities. Our data show widespread identification with our criteria across all employment types, reaffirming that parallels to addictive thinking can occur in almost anyone.

How We Describe Our Habits

As you review these answers from the individuals surveyed, you may find areas of identification. For some habits, the questions posed involved a nuanced context: Our increasing Internet use, for instance, may reflect the rise of smartphones. But if that's the case, don't we have even more reason to evaluate our Internet engagement? Availability doesn't always translate to necessity, and many of these questions ask us to consider how dependent we've become on behaviors we once did without.

Consider how our respondents described their use of social media, with nearly every participant admitting to checking these sites multiple times a day. A growing body of evidence suggests that social media can contribute to users' feelings of unhappiness and unpopularity.

Do we intend to check these platforms so often, or are we responding compulsively to instant gratification, despite negative long-term consequences? With more than two-thirds of respondents saying they'd like to check social media less, the latter seems the more likely explanation.

Similarly, respondents continued to drink coffee despite commitments to themselves or a doctor to do otherwise. Another 64 percent binge-watched TV at the expense of needed sleep or a work commitment the next day. These findings demonstrate just how often our short-term enjoyment works against our needs and goals.

Our intention isn't to equate the choices studied in this project to substance dependence or imply that the devastating results of addiction could also stem from these behaviors. Rather, we hope to shed light on the fact that many of us engage in habits that contradict our self-interest. From exercise to social media, sources of comfort or pleasure can often outweigh larger priorities in our daily choices.

Human beings aren't purely and consistently calculative: Our choices vary widely across a range of circumstances and with differing consequences. The habits we've considered here are just a few examples of the patterns we engage in every day. Can any of us claim that our every choice aligns with our larger values?

Our findings suggest that our habits are far less deliberative than we'd like to assume. Perhaps that's reason enough for us to counteract our assumptions about addiction with empathy and work against the stigma that disempowers people with addiction from seeking help.

If you are concerned about your relationship with drugs or alcohol, don't let the stigmatization of addiction prevent you from seeking information about your options. RehabPathway.com aims to help patients and families make better decisions about their care through free and informative resources related to addiction and treatment. Whether you're actively seeking help or are still assessing whether you need it, we'll stand with you as you make your decision.

Journal of the American Medical Association. Changing the Language of Addiction, website last visited on August 2, 2017.

Public Library of Science. Stigma of addiction and mental illness in healthcare: The case of patients' experiences in dental settings, website last visited on August 2, 2017.

The Atlantic. The Binge Breaker, website last visited on August 2, 2017.

Verywell Mind. A Guide to DSM 5 Criteria for Substance Use Disorders, website last visited on June 25, 2018.

In this project, we utilized the American Psychological Association's DSM-5 Substance Dependence Criteria. Their diagnostic framework entails the following description:

"Addiction (termed substance dependence by the American Psychiatric Association) is 'defined as a maladaptive pattern of substance use leading to clinically significant impairment or distress, as manifested by three (or more) of the following, occurring any time in the same 12-month period.'"

The APA then encloses a set of seven characteristic behaviors, reproduced here.

We then converted each question from the DSM-5 to questions about caffeine consumption, Internet, television, social media, exercise, and having sex and viewing pornography.

We then surveyed over 1,000 Americans and asked them to identify which of the habits included in our survey they'd engaged in within the last year and to answer the seven adapted questions referring to each. Their responses form the basis for our results.

Disclaimer: This project is in no way intended to serve as a diagnosis for any dependency-related condition.

Can you or your readers relate to one of these everyday addictions? Want to share the information on this page with your own audience? We invite you to do so for noncommercial use only. When doing so, we ask that you kindly provide a link for your readers leading back to this page.